Are you tired of these pictures yet? I’m not. I’m entranced by this place, every day.
I love Saturdays because I get to take the dogs out after sunrise. So, we took a little walk around the yard instead of just standing around in the “dog pen,” the fenced area on the slope in front of the house. 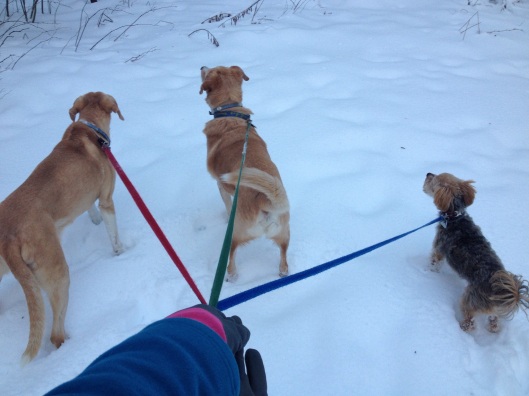 This is the dog-walking maneuver I like to call the Troika. 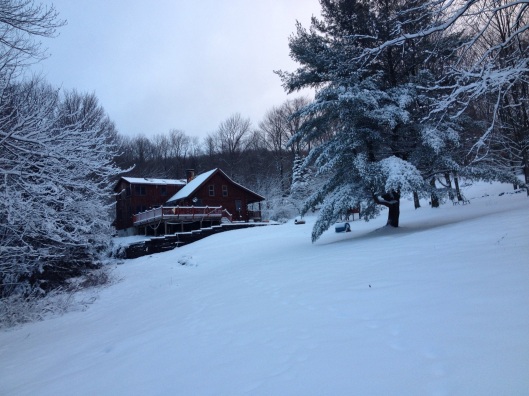 Isn’t it magical? Can you stand it? I can’t.

The chickens would like to move out of the FEMA coop into their chicken palace. And they would like the snow to melt. That is all.

Today is the longest day of the year, the summer solstice.  A time for rededication and rejoicing.  I got up to watch the sunrise and gather a few herbs, still wet with dew–rose, yarrow, lavender, elderflower, sage, lemon balm–whatever felt right to me.

Tonight I will light a small bonfire in the yard, a way of being grateful for this longest day by trying to extend it just a bit.  This Saturday in Finland, everyone will be lighting the Juhannus kokko, a bonfire.

As in much of Europe the pagan solstice celebration was combined into the Christian Feast of Saint John the Baptist.  In Sweden and in some parts of Finland there will be dancing around midsummer poles (we Americans think of them as Maypoles, but in Scandinavia, May is still too early in the year for the abundance of flowers and greenery.)

I wish you a joyous day, in whatever way you wish to celebrate this longest span of sun and light.  Blessed be.

The sun is shining, I don’t have to go to work today, and my wife will be home in less than 12 hours.  So… before she gets here I have to:

So, two new fun games I’m playing with the chicks.  I needed some cheerfulness, so I went and sat by the brooder/tub for a while.  Amelia has decided that this is her signal to hop up on my hand, which she did several times.  Every time I put her down, she would just come right back.  At one point I managed to coax Captain onto the other hand, so I had Amelia on one hand and Captain on the other.  If only I had a camera attached to my head, that would have been a great picture for this post.  They’re very sweet.  The Wyandottes still think I’m the devil.  We’ll get there eventually.  Not-Captain, hereafter to be known as Uhura, was okay with being held, and the Not-Amelias #1 and #2 also seem okay with it.

Then I brought out the freeze-dried mealworms.  (Never would I have thought to be purchasing, using, or writing about freeze-dried mealworms, but life takes you in surprising places.)  I’ve been waiting until I thought the girls were big enough to handle the mealworms, and I decided they could have a few tonight.  At first I just threw a bunch down in the brooder, but the girls didn’t really get the significance.  So I picked up one at a time and tossed them.  A little more interest.  Finally someone got the idea, grabbed a worm, and started squawking and running around the bathtub.  That is when the fun started.  Whoever had a mealworm would run and yell, and everyone else ran after her and tried to get it.  I started handing out mealworms like candy at Halloween (doesn’t that make you want to come trick-or-treating at OUR house, huh?), and eventually we had mealworm-frenzy chicken bumper cars.  It was wonderful.

And people wonder why I don’t watch more tv.

I love this time of year.  It’s such a temptation to go outside (even when I should be getting ready for work, like now!) and examine every bit of soil, every bud, every green thing appearing.  I even look forward to the time when the dandelions all bloom at once.  Last year, I collected dandelion blooms at their most open yellow brightness, saved them in the freezer, and made dandelion wine.  When you see these weeds as a crop, the world around you is transformed.  For now, though, I am entranced with every growing thing on this infant farm of ours… CoyoteCrow Farm.